A guest review by Scott Danielson. After I received the review book and realized it was not my sort of book, he filled the gap as someone who could appreciate and evaluate the book for me. Many thanks, Scott! 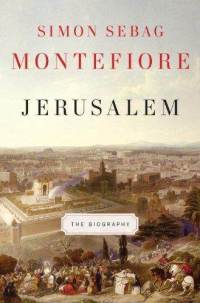 Prophets and patriarchs, Abraham, David, Jesus and Muhammad are said to have trodden these stones. The Abrahamic religions were born there and the world will also end there on the Day of Judgement. Jerusalem, sacred to the Peoples of the Book, is the city of the Book: the Bible is, in many ways, Jerusalem’s own chronicle and its readers, from the Jews and early Christians via the Muslim conquerors and the Crusaders to today’s American evangelists, have repeatedly altered her history to fulfil biblical prophecy.

A person could read the above paragraph and be inspired to consider how wonderful and sacred a place Jerusalem must be.  Another person would be forced to think about the bloodshed that has occurred in the names of those religions in Jerusalem.  I have never been there, but this book makes me understand that it's both of those things.  The history of Jerusalem contains examples of the best and the worst that humans have wrought on each other.

Simon Sebag Montefiore called his book Jerusalem: A Biography for two reasons.  First, the city has a personality of its own.  In that paragraph above, he refers to Jerusalem as "her".  The Talmud also refers to Jerusalem as a woman.  The second reason is that the book is about "the people that made Jerusalem, and how they built it, and how it developed.  It's people and families that build cities."

The book presents the history of Jerusalem from Abraham to the Six Day War.  It is separated into chapters that usually focus on a single historical figure.  Some example chapter titles: "The Fall of Antigonos: Last of the Maccabeans", "Duke Godfrey: The Siege", and "The Emperor and the Caliph: Charlemagne and Haroud al-Rashid".  The chapters are short and can be read as self-contained stories within the story.  It's extremely well-organized, very readable, and will be an excellent resource for years to come.

I never felt that the author (who is Jewish) was agenda driven.  In fact, I would have to say that the book had a distinct secular feel to it.  Referring to the paragraph at the beginning of this review, he states that people "have repeatedly altered her history to fulfill biblical prophecy", implying that any prophecy that may have been fulfilled was purposeful and deliberate.  This includes Jesus.  Of the Resurrection, Montefiore says: "Archaeologists tend to believe that the body was simply removed and buried by friends and family in another rock-cut tomb somewhere around Jerusalem."  The book is not "about" the religions of Jerusalem, but the subject is impossible to escape.  Overall, I feel he did a remarkable even-handed job, treating all religions with a bit of detachment.

I learned a great deal from this book, and I look forward to visiting Jerusalem someday.  I've stated before that I'm waiting for the dust to settle before I do, but it hasn't settled for 3000 years.  I don't expect it will any time soon.
By Julie D. at March 12, 2012