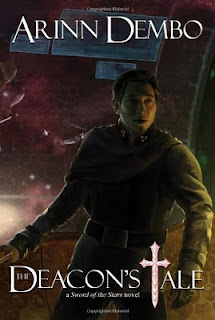 "This enemy seems to arrive in small numbers, but their attacks result in mass disappearances: once a system's defenses are overwhelmed or circumvented, the rippers are able to kidnap thousands at a time. And regardless of the defenses available on the ground, they seem to meet with little resistance once they land..."

"They take our people," he said quietly. "They snatch up their victims whenever and wherever our backs are turned, anywhere that they find our defenses weak. By the time we can react, they've vanished again without a trace. The ones we lose are never seen again."

Cai Rui is Task Force Commander of the infamous "Black Section" of the Sol Force Intelligence Corps. He's also a loyal Archdeacon of the Roman Catholic Church. There are four intelligent species in the known universe, including humans or "apes" as they call themselves. Cai Rui must work with each group if he is going to track down and foil the brutal, new species that is preying on them all. Even more disturbing than the slave trade is that the evil aliens are led by one who calls himself Black Deacon and seems to be able to read souls.

The subtitle is "a Sword of the Stars novel." I've never heard of the "Sword of the Stars" before but I see from checking the Amazon reviews that it is a video game. If they had a Mac version, I'd try it because it looks interesting. However, you don't have to know the game to read the book. Also the game developer is the author of this book which is an interesting twist.

I wound up enjoying this book which was a fast-paced military sf book. Catholics will enjoy the fact that Cai Rui is absolutely a "good" and loyal Catholic who can best practically everyone in combat and smarts. Catholic elements are treated with respect although not everyone who is Catholic is a good person which, sadly, is quite true to life. We are happy to despise a certain Cardinal who seems to be meddling with nefarious purpose.

I also enjoyed the alien races who the author portrays vividly. They do not fit our expectations of the "classic" alien race types which is a nice surprise. The Hivers are insectoid but don't have a hive mind. The Tarkas are reptilian but artistic and sensitive. The Liir are an air-breathing aquatic species (which made me think of dolphins although they have tentacles) who are powerful telepaths.

The Deacon's Tale was a bit too fast-paced in some places as I finally had to read the appendix on the alien enemy to even get a decent idea of what they looked like. In fact, until I checked the appendix on Liir I didn't have a good grasp on their appearance either. This isn't the case for the other species but, again, the book often eschews description for action. A few other details were also glossed over in an unsatisfactory way. I wanted to know more about why the traitor betrayed his race in favor of the enemy, for one thing.

Overall, however, The Deacon's Tale was a fun read that kept me up late to see what would happen. I'd definitely be interested in reading the sequel.
By Julie D. at December 16, 2011