Who knew Armageddon Could Be So Funny? Reviewing "Mercury Falls" by Robert Kroese 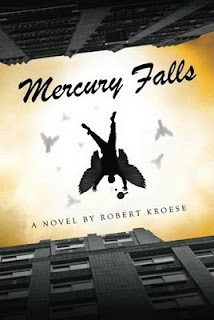 He carried the ketchup bottle to the breakfast nook and popped open the lid. Time to do some serious damage, he thought. But there was only about half a bottle of ketchup and, and he wanted to make it count. He didn't want to just make random blotches of ketchup. It should be something meaningful, someting offensive. Something that would make the owner really want to get rid of the carpet. A satanic symbol, he thought. Yes, that's it.

... As a new transfer, however, Nisroc hadn't yet attended Lucifer's seminar on Branding for the New Millennium, and was thus starting from scratch.

He had heard that an upside-down cross was sometimes used, so he started with that, carefully drawing perpendicular ketchup lines on the carpet. He was rather satisfied with the result until he realized that he had drawn it upside down from the perspective of someone in the kitchen -- when viewed from the front door, it was a normally oriented cross. Now what?

Actually, anyone who's read Good Omens by Neil Gaiman and Terry Pratchett knows that Armageddon can be extremely amusing. What's truly wonderful is that Robert Kroese takes the concept to California and makes it funny all over again, in a completely different way.

Christine reports on end-of-time cults for a Christian newspaper. And she's having new linoleum installed in her breakfast nook. Her boss's obsession with the apocalypse results in her being entrusted with a locked briefcase about which she was told, "take it to Mercury." (Her boss is putting off new flooring.)

Mercury is a cult leading, ping-pong playing, Rice Krispy treat eating ... angel. He is maddeningly blase about the rapidly approaching apocalypse, although he is happy to be friends with Christine. After Christine encounters a very sulky Antichrist -- who lives in his mother's basement playing computer games -- she becomes determined to save the world. With hilarious results. And flooring.

Kroese's plot pulls together a varied cast of characters and scenarios with wonderful pacing for excellent comic effect and a story that had me staying up late and reading at breakneck speed. I laughed out loud more than once and pestered family members by reading funny sections aloud (which happened a lot). Kroese liberally skewers both religious and nonreligious, but is always solidly on the side of common sense, humor, and a good story. And flooring.


Harry's belief that he was guided by the voices of angels that only he could hear was, surprisingly, one of the least unreasonable of his many absurd beliefs. For example, he also believed that God created photosynthesis before He created the sun and that all of the world's animals had once taken a Mediterranean cruise together. Having convinced oneself of those unlikely propositions, accepting the notion that one is hearing the voices of angels is pretty much a cakewalk. 5

5 People of a "scientific" bent have been known to ridicule those, like Harry, who believe unlikely notions such as the idea that the Universe was created in six days and that the first human being was formed by God breathing into a lump of clay. It should be noted that the latest scientific theories entail that (1) all of the matter in the Universe was once compressed into an area smaller than the point of a pin; and (2) life came about when a chance collision of molecules accidentally lined up three million nucleic acids in exactly the right order to form a self-replicating protein.