The Catholic Things We Do: Reviewing "Catholicism" by Robert Barron

This review originally ran almost a year ago. Showing up to help with our parish's RCIA program, I was delighted to find it is occasionally going to be featuring a DVD from the Catholicism series that this book accompanies.

Watching the first one last week brought this marvelous book to mind. Surprised to find that no one had heard of it, I thought I'd rerun the review to remind all of us about it. I am inundated with new books these days and have fallen out of my former habit of rereading. That's a shame since a fast-reader like me often needs more than one reading to gain insights. I may have to pick up this book again. In the meantime, I recommend it to you.

This review is also appearing in my A Free Mind column at Patheos. 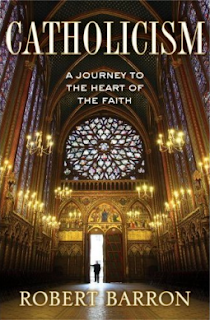 Since my conversion, I have read many a book about saints, angels, prayer, virtues, and all those good Catholic subjects. Reviewing the list, however, I was surprised to see how few of them covered Catholicism as a whole.

The Catechism of the Catholic Church, of course, is a reference I use regularly. The impeccable logic of Peter Kreeft's Catholic Christianity helped settle my mind about Catholic teachings on controversial issues. Catholicism for Dummies and The Complete Idiot's Guide to the Catholic Catechism are favorite references.

None of them, however, are designed to be engaging, uplifting reading (although the Catechism certainly can perform that function).

Enter Catholicism: A Journey to the Heart of the Faith by Father Robert Barron. Barron has the knack of articulating Catholic theology in a way that makes one sit up in astonishment and delight as well-worn concepts take on fresh, new life. Look at his presentation of what the Incarnation means to us, as human beings.


In their own ways, Marx, Freud, Feuerbach, and Sartre all maintain that God must be eliminated if humans are to be fully themselves. But there is none of this in the Christian doctrine of the Incarnation. The Word does indeed become human, but nothing of the human is destroyed in the process; God does indeed enter into his creation, but the world is thereby enhanced and elevated. The God capable of incarnation is not a competitive supreme being but rather, in the words of Saint Thomas Aquinas, the sheer act of being itself, that which grounds and sustains all of creation, the way a singer sustains a song.

And the Incarnation tells us the most important truth about ourselves: we are destined for divinization. The church fathers never tired of repeating this phrase as a sort of summary of Christian belief: Deus fit homo ut homo fieret Deus (God became human so that humans might become God). God condescended to enter into human flesh so that our flesh might partake of the divine life, that we might participate in the love that holds the Father, Son, and Holy Spirit in communion. And this is why Christianity is the greatest humanism that has ever appeared, indeed that could appear. No philosophical or political or religious program in history—neither Greek nor Renaissance nor Marxist humanism—has ever made a claim about human destiny as extravagant as Christianity's. We are called not simply to moral perfection or artistic self-expression or economic liberation but to what the Eastern fathers called theiosis, transformation into God.

God's noncompetitive love and our transformation into the divine are touchstones that Barron returns to throughout the book. As he presents Catholicism in all its complexity—from Jesus as warrior to Mary and the saints to the Eucharist and beyond—readers begin to grasp that love and transformation are indeed the core of the Catholic faith.

Barron's enthusiasm is palpable and his examples vivid. I especially enjoyed the way he wove imagery throughout his text, only to suddenly expand it to make larger theological points. I already was familiar with Noah's ark as an image of the Church, as a place of safety for all. However, it was a revelation when he took it one step further and pointed out how medieval architects reinforced the connection by endeavoring to make cathedrals look like great ships. He gave me potent, mind's-eye images that stuck with me through the rest of that section.

Here, Barron makes a similar leap, bringing the gospel to life, and into our immediate lives, with great enthusiasm.


Saints are those who have allowed Jesus thoroughly to transfigure them from within. Paul caught this when he observed, "yet I live, no longer I, but Christ lives in me" (Gal 2:20). In chapter 5 of Luke's Gospel we find an odd story about Jesus and Peter. As the eager crowd presses in on him, Jesus spies two boats moored by the shore of the lake. Without asking permission, he gets into the boat belonging to Peter and says, "Put out into deep water and lower your nets for a catch" (Lk 5:4). What followed, as we have seen earlier when analyzing Mark's version of this scene, is the miraculous catch of fishes. Read with spiritual eyes, this story reveals the essential feature of sainthood. For a Galilean fisherman his boat was everything; it was his livelihood, his work, the means by which he supported his family. Peter's fishing vessel represents, therefore, his professional creativity, his link to the wider world, the key to his survival. Jesus simply gets into the boat and commences to give orders—and the result is the greatest catch Peter the fisherman ever made. Jesus' uninvited boarding of the vessel represents the invasion of grace, the incoming of the divine love into someone's life. Precisely because God is noncompetitive with creation, precisely because he wants human beings to come fully to life, this inrushing of grace does not destroy or interrupt what it invades; it enhances it and raises it to a new pitch. Peter, one presumes, had been successful enough as a fisherman, but now, under Jesus' direction, he goes out into the deep and brings in more than he could ever have imagined possible. This is what happens when we cooperate with grace, when we allow Christ to live his life in us.

The saints are those who have allowed Jesus to get into their boats and who have thereby become not superhuman or angelic but fully human, as alive as God intended them to be. The entire purpose of the church, as we have seen, is to produce saints.

The book is not perfect. Over a hundred black and white photos are included and they are well enough in their way, but color would have packed a greater punch. I would have traded the eight-page color plates at the center for colored photos scattered throughout the book, instead. Too many shots of great art were rendered unremarkable in black and white, which is ironic, as the book is a companion to a ten-part Catholicism television series. A key point of the series is the beauty of the Catholic faith as expressed through the work of human hands. While the book stands alone, it fails to amplify that beauty for its readers.

I also found that Barron occasionally couldn't resist diving instantly into complex concepts that might have done better with a more extended simple introduction. This is especially true in the chapter about prayer. He moves too quickly into the prayer lives of Thomas Merton, St. John of the Cross, and St. Teresa of Avila, all of whom may intimidate even seasoned Catholics with their far-reaching concepts. While Barron does address the sort of basic petitionary prayer that is the cornerstone of most people's experience, he quickly jumps to Merton. I was thoroughly confused halfway through and had to reread the chapter. Barron would have done well to recall that some readers may be completely new to prayer or may come from Christian backgrounds that might view the mystics with deep suspicion.

These points aside, Barron's book is a real treasure. His development of Heavenly imagery into a place I could actually imagine myself inhabiting has charged me with excitement about getting to Heaven. His points about Jesus as a warrior reminded me that I, too, am called to never give up, never surrender. His guide to Dante's Divine Comedy invested layers of meaning in the books about Purgatory and Heaven I completely missed when I read them.

Catholicism is a wonderful guide to the heart of the Catholic faith. It will no doubt explain the faith to many, and light the imaginations of those already on that journey.
By Julie D. at September 20, 2012