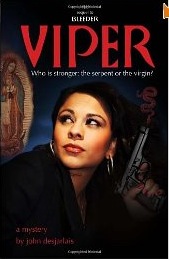 It was five years ago.

At that time, like every time, Selena saw right away why he called himself La Serpiente, The Snake.

For one thing, he wore rattlesnake-skin boots with the steel toes that Bragg and her Anglo colleagues at Drug Enforcement sneeringly called "Fence Climbers." When he crossed his sinewy legs and swung his foot, the tip glinted.

For another, his unmoving onyx eyes fixed on her cleavage -- not all that uncommon when she met men -- but that gaze was not measuring her size. It was calculating a striking distance. She averted her eyes to the side, a demure Mexican custom she hadn't lost through acculturation. Locking eyes is also how snakes paralyze their prey. She wouldn't give him the pleasure.

Viper is the sequel to Bleeder, which featured Reed Stubblefield's story, but it functions well enough as a stand-alone thriller. Selena loves sexy shoes, working on cars, and Reed, although his Anglo heritage makes her worry about introducing him to the family. Abruptly, her past as a Special Agent in the DEA comes back to haunt her when she learns that La Serpiente is back. Her name's been found on a list where the only way off is when you are killed.

Viper immerses the reader in Hispanic culture as Selena deals with family problems as well as the more thrilling ones that threaten her life. The Catholic culture is less obvious although it is still important to Selena's life and to solving the mystery. Luckily for readers, Desjarlais navigates both well.

Viper is enjoyable although I found Selena's immersion in her culture made the story a bit one-dimensional. I'd have liked seeing her interact with others from outside the Hispanic or DEA community. That said, I found Viper an enjoyable thriller and am hoping there will be a third book where we get to see Selena and Reed together.
By Julie D. at September 15, 2011