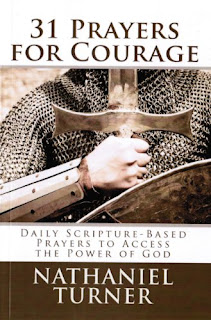 How forgetful I can be! You have told me before, writ in Your Word when You spoke to the Israelites, to Abraham, Isaac, and Jacob, to Moses, to Joshua, Your servants: I should not be afraid because You go with me. No matter what opposition I face, You accompany me. Wherever I go, You are there; if I ascend to the heavens, or go down to the place of the dead; if I pursue the dawn in the east or the ends of the sea to the west; truly, even if I walk in the valley of the shadow of death, there You are to guide me and protect me, as you Promised Joshua and the Israelites as they entered the land which You had given over to them. Help me to remember these things, O LORD, and not to fear.

In Thy Son's Name I pray, AMEN

31 Prayers for Courage: Daily Scripture-Based Prayers to Access the Power of God

contains not only 31 prayers, keyed off of a piece of scripture, but also has them in different sections so that one may look for prayers based on what one needs courage for.
I like the fact that the prayers seem to take in the context of the scripture in case one needs reminding in a time of need.

I myself tend not to pray this sort of prayer and would probably tend to use this more as inspiration, with the prayers almost as mini-homilies in times of need. However, I have several friends who would enjoy this sort of book and use it a great deal. It works either way, as the author mentions at the beginning of the book.

This isn't a Catholic book but I didn't see anything that looked off base for Catholics, especially since it is simply scripture and prayers. The author is planning a series and I could see this being a useful gift, depending on the topic of other series.
By Julie D. at September 16, 2011