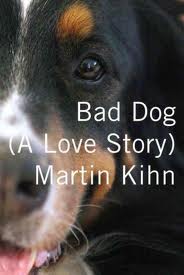 Lorena leaves me with a handout titled "The Rules of Passive Dominance," which begins: "Ignoring attention-seeking behaviors is the highest form of dominance."

Attention seeking: Grabbing shoes and making you chase her. Soft sweet cries and I say, "What's wrong, Hola, you hungry doll?" Poke and pet, roll over and rub reflexively, even yelling "Drop!" when she's got our neighbor's kid's sandal in her mouth, shaking it like a squirrel that's dead enough already.

Negative or positive--it's all attention seeking.

What she lives for.

"Her job is to train you," Lorena had said. "She's better at her job than you are because she is more focused. It's all she thinks about."

Hola's toolbox consists of annoying me until I do what she wants.

Which I always do.

Because it's annoying, that's why.

She'll collapse on the floor like a character in Gossip Girl tossing her Fendi bag onto the davenport.

Now I'm seeing her behaviors through a new frame. Her whining isn't an existential scripture on the brevity of life. The way she pokes her head and makes me pet her isn't a rhapsody on the mutability of love.

No, the new hermeneutics is that she's a spoiled kid throwing tantrums just to get her way. The more I look at her I see she is in a state of perpetual tantrum. She makes spoiled kids look evolved.

How can I have been so wrong for so long?

Ignorance is an expensive occupation.

Martin Kihn was a high-functioning alcoholic, although very few knew it. Like many alcoholics he was expert at hiding the signs. One who loved him wasn't fooled though, and that was his dog, Hola. Untrained and unruly, she exhibited increasingly bad behavior up to the point of threatening his wife.

Martin had been told that his dog reflected his behavior. However, it took his wife, Gloria, leaving to make him take it seriously enough to pursue obedience training. This set him on a a journey of exploration which resulted not only in learning about a variety of dog training philosophies but in healing self-discovery.


Petra Ford opens a door in my heart: she shows me that dog training is a form of art and an act of love. I've never seen two beings listen so carefully to each other or care so much. I think of Gloria. I think of Hola.

Humility is not thinking less of myself. It is thinking of myself less.

I enjoyed this book for the dog training overviews, especially since that technique that worked best for Hola is the one we've had to use in our household of four dogs. I also liked the glimpses that Martin shared about his dawning realization that God ... or as he terms it "HP" for Higher Power ... is out there, reaching out to him all the time. These glimpses are few and subtle so readers who are turned off by such content don't need to worry that they will detract from the story.

Overall, this is the story of a man and his dog and how they helped each other to a more fulfilled life. Recommended.


That night I take an exhausted Hola on a slow walk through a darkening forest, over ruts in the track from horses and ATVs.

We look up at the clouds so close I can almost touch them, and I receive a wordless message from HP.

I need to stop wishing my dog is something else.

I need to stop wishing I was someone else.

This feels like just the first step of the first awakening.

But still, it's the first.