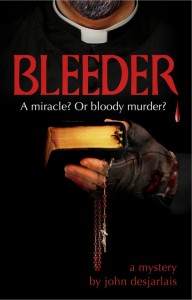 Reed Stubblefield is on his way to his brother's cabin in a small Illinois town. He needs time to recuperate from a debilitating injury, he is traumatized by his wife's recent death, and he is writing a book. A little peace and quiet are just what the doctor ordered, right?

Of course, Reed is plunged almost immediately into local controversies. Is the local priest a stigmatic? Can he heal with a touch? Why does a disconnected phone ring? And who is on the other end? Is the local Hispanic community up to no good? When the priest is murdered and Reed is the prime suspect, he must look for answers to these questions and more to find the real murderer.

by John J. Desjarlais grabbed me by the throat and I read it in two days.

I liked Reed's skepticism about healing powers and his ambivalence toward religion in general. I also liked his conversations with priests, especially Monsignor DeMarco, who proved reasonable and understanding of Reed's opinions, but who still explained and defended the Catholic faith ... without being defensive.

I liked the way that the varying viewpoints were shown about the recently swelling illegal Hispanic population. Not everyone had a good point, but they all had a point to make. Just as in real life, where sometimes you can't argue with the local bigot down the road as much as you would like to because ... darn it ... there is a kernel of truth at the bottom of their reasoning.

I liked the way that the author skillfully would segue from one scene to another, often via dreams, and leave me thinking we were heading in one direction only to have me realize I was completely wrong a few sentences later.

I like the way that not every single thing was explained at the end, leaving readers free to their own thoughts about cause and effect. I also enjoyed the philosophical conversations that would come up, not lasting too long, but long enough to draw me in and give me something to think about.

I especially liked the way that Aristotle chimed in whenever conversation ran along lines which made Reed's mind turn to him. Author John Desjarlais' paraphrases showed me just how many things Aristotle can be applied to and I came to look forward to the little insertions of commentary.


... But how did he recognize me at the cafe? Are healers mind-readers as well? Was someone playing a trick on me?

The gods, too, are fond of a joke, Aristotle chuckled.

In short, I liked this book. A lot.

I didn't guess the murderer but I rarely do so that was not a surprise. I did have one big overriding question through most of the book. The resolution to that question turned out to be the key to the murderer as well, although I didn't see it until it was explained to me. I did guess a few things but they were nothing which mattered much in the end.

John J. Desjarlais not only has a deft touch with mystery construction and story, but has a distinct gift for sketching characters. We know who we like and dislike, and find that the author often has reasons for those characteristics which affect us one way or the other, without being obvious in his methods.

I will mention that I got interested in Bleeder after seeing a review to the sequel, Viper, by Sarah Reinhard.  After Sarah kindly put me in touch with the author, he sent both books. This is all to say that as soon as I put Bleeder down, I grabbed the advance copy of Viper and began reading. By then I had forgotten that Selena de la Cruz was the main character in the book. However, when I "met" her in Bleeder, I took to her so quickly that I was hoping that she would be the next person we would follow. I was delighted to find out that is the case. Viper takes off at breakneck speed and I'm loving the ride.