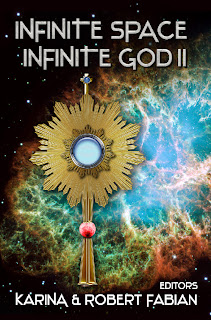 The Ghosts of Kourion by Andrew Seddon:  A grieving professor escapes back in time to live among a doomed people.

Antivenin by Karina Fabian:  Rescue Sister Rita takes on a ship full of venomous snakes in order to save a friend.

An Exercise in Logic by Barton Paul Levenson:  How do you convince an infuriatingly logical race to stop an asteroid?

Cathedral by Tamara Wilhite: A genetically engineered human spends the last of her tortured days righting her wrongs.

Otherworld by Karina Fabian: Does sin really count when it's virtual?

The Battle of the Narthex by Alex Lobdell:  An alien battle in a most unusual setting--tickles the funny bone and touches the heart!

Tenniel by Colleen Drippe':  The battle for souls becomes a battle to the death.

Tin Servants by J Sherer:  In order to serve his people, Paul becomes an android--but can he really care for them as a tin servant?

Basilica by John Rundle:  Caprizo battles machines and thwarts an enemy armada to keep a doomsday weapon from their hands.

Cloned to Kill by D. Mak:  How can a man of peace protect a clone designed to kill?

Frankie Phones Home by Karina Fabian:  A sixteen-year-old alien abductee calls her family on the way back for official First Contact.

Dyads, Ken Pick and Alan Loewen:  Enter the fascinating culture of the Thalendri in a story of intrigue, terrorist and religious tolerance.

Way back in 2008, I reviewed Infinite Space, Infinite God, an anthology of science fiction centered on Catholicism.  In some ways we cannot avoid comparing a second volume to the first. In fact, editors Karina and Robert Fabian do the same in the introduction when they point out that the first anthology had stories centering more on the Church as an institution. In this second book, the stories tended to focus more on individuals and their struggles, using Catholicism as the context through which we view them.

I found Infinite Space, Infinite God II to be a stronger set of stories overall and one that I could recommend unreservedly to non-Catholics because the overall themes ran strongly to a general science fiction theme rather than to faith. This is not to say that the stories don't address faith, but even for nonbelievers there is something interesting to be found in practically every one of them. The stories are imaginative and, although some are light-hearted, all of them lead readers to think about serious issues, as is the case with the best science fiction. I also especially enjoyed the way that each of them featured the Church which has adapted to the future but which never ignores or betrays her mission.

As before, I found each story introduction to be well written and interesting although, as before, I found there was a bit too much revelation about the story or what characters learned for my taste. I read most of them after I read the story as a result. However, this is an issue that I have come across in many anthologies and it is a matter of personal taste.

My favorite stories:
I can't say nearly as much as I would like about these stories without giving away plots but these stories equal anything found in other science fiction anthologies. They are practically perfect in every way.

The above link is to Amazon but there are many formats available and Twilight Times Books has links.
By Julie D. at April 19, 2011