The Old, the New, and the Third: Reviewing "The Third Testament" 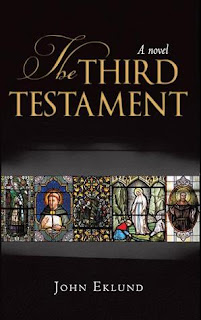 Fred is a grieving widower with one daughter who lives near Chicago. A faithful Catholic, he begins having a series of dreams which make him realize that he is being prompted to write the third testament to the Bible ... which would update it for modern times. Soon after this, he is served with what seems to be a bogus summons that nonetheless threatens to take his home from him and his daughter finds she has melanoma which is spreading rapidly through her body.

At this point, Fred turns to his writing as a panacea for his mental and emotional struggles. The current story serves as a thin thread which holds together the history that Fred is writing. The author includes much more of the history, both as Fred's thoughts and then as samples of what he is writing. Eklund has a knack for picking out interesting people and events and pulling up tidbits that I hadn't heard, even when I was familiar with the overall piece of history.

was an interesting book on several levels. It is clearly a first novel and the author does not have a very good ear for natural dialogue. He also has a tendency to preach a bit when the protagonist is thinking. For example, gazing at the sky and seeing an eagle, Fred suddenly takes a mental side trip onto American virtues. This is a bit wearying and tended to put me off the book.

The modern story is extremely one dimensional, yet, I nevertheless found myself interested in whether Ellen would beat her cancer, the different places that Fred would encounter his new friend (Tony), and whether we would get more than a whiff of evil from the lawyer suing Fred.

I am glad that I persevered despite the sometimes clunky writing in the modern section because the author has a much more natural flow when writing any of the "third testament" and detailing Catholic Church history. There still is a tendency to preach some but since it is within the context of the history this becomes easier to take.

The book as a whole overcomes the problems if one is willing to overlook them and I found it a satisfying read. I will be interested to see what this author writes next.