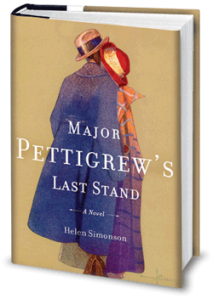 "Women always ask," she said. "My aunt Noreen is having migraine attacks from all the scandalized ladies dropping by to ask her about me."

"Men never ask, but you can see they've made up a whole story about me and George in their heads." She turned away and placed her fingers where the rain ran sideways along the glass of her window. The Major's first impulse was to claim he never had given it a thought, but she was very observant. He wondered what truthful comment he could make.

"I'm not going to answer for men, or women, in general," he said after a moment. "But in my own case, I believe there is a great deal too much mutual confession going on today, as if sharing one's problems somehow makes them go away. All it really does, of course, is increase the number of people who have to worry about a particular issue." He paused while he negotiated a particularly tricky, right-hand turn across the busy road and into the shortcut of a narrow back lane. "Personally, I have never sought to burden other people with my life history and I have no intention of meddling in theirs," he added.

"But you're making judgments about people all the time--and if you don't know the whole story ..."

"My dear young woman, we are complete strangers, are we not?" he said. "Of course we will make shallow and quite possibly erroneous judgments about each other. I'm sure, for example, that you already have me pegged as an old git too, do you not?" She said nothing and he thought he detected a guilty smirk.

"I think everyone has the right to be shown respect," she said.

"Ah well, there you go." He shook his head. "Young people are always demanding respect instead of trying to earn it. In my day, respect was something you strove for. Something to be given, not taken."

"You know, you should be an old git," she said with a faint smile, "but for some reason I like you."

This is one of the relatively few straight forward commentaries about modern behavior found in this delightful book. However, it still managed to surprise me with that last truthful observation about earning respect. Keep in mind that the major here is speaking of the respecting of an individual versus the respecting of people in general. That is an important distinction and one which the major himself must be reminded of during the telling of this wonderful story. Adding another layer of irony is the fact that the Major's policy has failed entirely in his own son, who we love to loathe.

Major Pettigrew's Last Stand is a wonderful romance late in life by two people. As well it has a wonderful look at the tensions of old-style English village life versus modernization, the older generation versus the newer and generally callower generation, and various other issues of the times in which we live. All of it is handled gently and with humor.

"I wonder if it might be a little spicy for the main course," said Grace, cupping her hand around her mouth as if making a small megaphone. "What do you think major?"

"Anyone who doesn't find this delicious is a fool," said the Major. He nodded his head fiercely at Mrs. Rasool and Mrs. Ali. "However. . . ." He was not sure how to express his firm conviction that the golf club crowd would throw a fit if served a rice-based main course instead of a hearty slab of congealing meat. Mrs. Rasool raised an eyebrow at him.

"However, it is perhaps not foolproof, so to speak?" she asked. The Major could only smile in vague apology.

"I understand perfectly," said Mrs. Rasool. She waved her hand and a waiter hurried into the kitchen. The band stopped abruptly as if the wave included them. They followed the waiter out of the room.

"It's certainly a very interesting flavor," said Grace. "We don't want to be difficult."

"Of course not," said Mrs. Rasool. "I'm sure you will approve of our more popular alternative." The waiter returned at a run with a silver slaver that held a perfectly shaped individual Yorkshire pudding containing a fragrant slice of pinkish beef. It sat on a pool of burgundy gravy and was accompanied by a dollop of cumin-scented yellow potatoes and a lettuce leaf holding slice of tomato, red onion, and star fruit. A wisp of steam rose from the beef as they contemplated it in astonished silence.

"It's quite perfect," breathed Grace. "Are the potatoes spicy?" The elder Mr. Rasool muttered something to his son. Mrs. Rassol gave a sharp laugh that was almost a hiss.

"Not at all. I will give you picture to take back with you," she said. "I think we have agreed on the chicken skewers, samosas, and chicken wings as passed hors d'oeuvres, and then the beef, and I suggest trifle for dessert."

"Trifle?" said the Major. He had been hoping for some samples of dessert.

"One of the more agreeable traditions that you left us," said Mrs. Rasool. "We spice ours with tamarind jam."

"Roast beef and trifle," said Grace in a daze of food and punch. "And all authentically Mughal, you say?"

"Of course," said Mrs. Rasool. "Everyone will be happy to dine like the Emperor Shah Jehan and no one will find it too spicy."

Helen Simenson tells a story of Major Pettigrew's path to true love, sacrifice, and redemption as it can only be told in a small, unspoiled English village. That is to say, she tells it using everyday people and problems, none of which are completely good or bad. In fact, the least fleshed out character in the novel, who commits an act of villainy, is allowed to deliver a few sentences which do not alleviate our dislike of the character or their actions, but likewise lend us understanding of their own history and motive.