A Thumping Good Read: Crown of the World 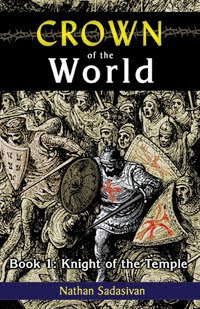 “I will not wear a Crown of Gold where my Master wore a Crown of Thorns.”
—attributed to Godfrey de Bouillon, upon being offered the crown of Jerusalem
Some time later, Godfrey awoke. He had no memory of going to sleep, but his mind was much clearer. Clearer…except for an image and a thought on the edge of his memory. He had been dreaming, dreaming very vividly, and he had dreamt something about…

Godfrey tried to call the images into his mind:

Conrad and Adelaise…and me. Jacques was there too, but not with the rest of us. And old Otto of Freising. He was telling something to Adelaise and me…

Godfrey’s heart ached, but he could recall no more. The dream faded, and Godfrey let it go wearily.

How long has it been?

It was still dark, still night. He was lying on some torn piece of cloth next to the fire. Someone was sitting next to him. His vision was a little blurry, but he stared for a few seconds and it cleared. It was Humphrey. Humphrey still looked battered and wounded, but there was a broad grin on his face.

“I was bloody right, Templar.”

Godfrey frowned, but quickly went back to staring. Frowning hurt.

“You do have some of Godfrey de Bouillion in you.”

“It seems to me,” said Humphrey, “most of the saints had a touch of madness in them. I think it’s a sign that God loves them.”

Godfrey tried to laugh, but it came out as a weak gurgle.

“If you are mad,” continued Humphrey, “we need more madmen. A few more fools like you and we’d have had the Ishmaelites running.”

Godfrey could remember now what had happened. You fool, he thought with a sinking heart, You’ve gotten yourself too deep in for even Blanchefort to get you out now.

He had been waiting with the knights of Tripoli. He had at last convinced Jacques that it would be wrong to fight, so the two of them were waiting at the rear. Godfrey had seen the infidels come, and had watched, shocked, as Tripoli began riding up and down, shouting out to his men.

‘Knights of Tripoli, do you know what the king wants you to do?’ Tripoli had roared, visibly angry. ‘He wants us to run! He wants us to flee, to try to deceive the infidels. Then his knights will crush the Ishmaelites and return to Jerusalem with tales of the cowardice of the men of Tripoli. What do you say to that?’

The knights of Tripoli had not approved of the king’s orders. Their uproar had drowned out Tripoli’s voice for a while, and Godfrey had caught only snatches of his speech. He caught words like ‘glory’ and ‘honor’ often. Finally the noise subsided, and Tripoli had ridden to the head of the line. All the men of Tripoli had waited in silence as Tripoli faced the infidels. Then the count had given the order to charge.

Godfrey had sat there on his horse, still not fully believing what he was seeing. The knights of Tripoli had surged forward towards the Saracens, leaving the rest of the army behind. A few minutes later, the knights of the Hospital had broken formation to charge, and then the knights of Ibelin. Jacques had made some insulting comment about the Hospitallers, but Godfrey had been too surprised to really notice.

So Godfrey had watched as a third of the kingdom’s knights charged up the hill, while the rest of the army sat and watched. He had kept looking up towards the king’s banner, to see if Amalric were going to come to their aid.

It was then that he had realized what was happening. To Amalric, this battle was no more than his bloody game of thrones. Tripoli and D’Aissailly and Ibelin had committed treason, so those three must die. If two thousand others must die with them, so be it.

Godfrey had grown angry at that, and in his anger had thrown caution to the winds. He still felt dizzy remembering it. He had spurred forward, drawing his sword and shouting incoherently. Then he began riding up to join the knights of Tripoli, forgetting any past resolution to stay out of the battle. As he rode up the hill, Godfrey had thought he was leaving them all behind, the king and the Army and Jacques, but to his surprise he had heard the sound behind him as others followed. By the time he had reached the top a dozen others had joined him, and most of the army was behind him. ...

Crown of the World is an exciting work of historical fiction set in the days of the Crusades when Christians held the Kingdom of Jerusalem ... and when that kingdom is slowly being lost. We follow Godfrey de Montferrat, a young Templar knight who truly has the goal of being a hero and a saint. We see him strive and fail and then try again to live as a true Christian should as he encounters all manner of people, places, and situations that are new to him.

I am a sucker for good historical fiction, which I find all too often cannot match the heights now that were achieved by many writers of the past. This book was a pleasure to read as it strove before all to tell a good story without hitting the reader over the head with a Christian message. That message is necessarily part of any tale of the Crusades, especially one focused around a Templar knight and the author wisely allows it to be a subtext.

The author, Nathan Sadasivan, began the book when he was 15 and finished when he was 19. It does show a raw talent that leaves me interested in reading the rest of the proposed trilogy and, indeed, any other book that he may turn his hand to. He has a definite talent for translating history into adventure while still giving the reader something deeper to ponder.

However, due to the author's youth and inexperience, Crown of the World is not an unqualified literary masterpiece. There are far too many points of view with the reader being whisked from person to person, place to place, often without necessary context to help recall under what conditions one last encountered a character. Indeed, there is too little contextual information given as a whole. Although there are commentaries here and there from various points of view, it would have been good to have an omniscient narrator to assist tracking so many characters. These are also points that one hopes an experienced editor could have pointed out to a young author as the book was being prepared.

I would advise Sadasivan to take some time to read some of the excellent historic fiction available and to note techniques to smooth out delivery as one moves the reader through time with the story. My own favorites to recommend would include Kenneth Roberts who was acclaimed for his works about the American Revolution; Rafael Sabatini who incorporates a good feel for the time period without skimping on action or thoughtful characters, and (my absolute favorite) Samuel Shellabarger whose Prince of Foxes and The Captain from Castile are landmarks of accurate history combined with riveting adventure, memorable characters, and social commentary that holds up today.

This is all offered as constructive criticism for the author and is not intended to discourage readers. I truly enjoyed Crown of the World and plan on reading the rest of the trilogy as it is published. It does not take too much effort to overcome what I felt were distractions from an otherwise very good book. Truly it is an amazing book for a 19 year old to have written. It makes me think back to the first time I ever read Georgette Heyer's The Black Moth, written when she was 19 to amuse a sick brother. It showed great promise and was a highly entertaining work that presaged greater works to come as her potential blossomed. Crown of the World is no different in those respects. One may enjoy it for its own merits and for the promise that I hope will give us many excellent works of historical fiction in the future. Highly recommended.

This was a review book received from Arx Publishing where you may read an extended excerpt here.
By Julie D. at November 25, 2009