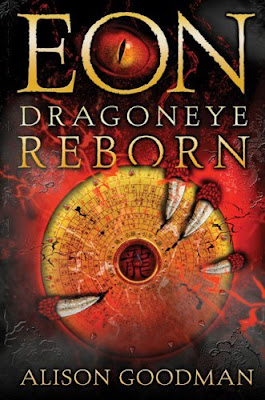 Eona is known as Eon. She has been masquerading as a boy in order to be eligible in training for a chance to become a Dragoneye. When the ascendancy tranfers from one to another of the 12 energy dragons that protect China, a new Dragoneye is chosen to help direct that power. Eon must hide her secret while simultaneously thwarting a plot to overthrow the throne. As well there is soul searching and a knowledge of self that is examined through several characters, not the least of which, of course, is experienced by Eon.

This sounds cliche but don't let that stop you. Some of the plot elements are predictable. For example, it was not difficult to guess what the problem was with the Mirror Dragon. Nonetheless, this book is anything but a cliche, I assure you. Set in a mythical land with echoes of ancient Japan and China, Alison Goodman has created something unique and compelling in this YA story that deserves to be read by adult fantasy readers as well. I originally read about this book in a review by Orson Scott Card that I encourage you to read as well. He describes more of the plot though without spoiling it and said:

"It's a terrific first novel in a fascinating world, fully realized by a writer who knows her craft and can spin a story.

... Eon deserves to be a smashing success."