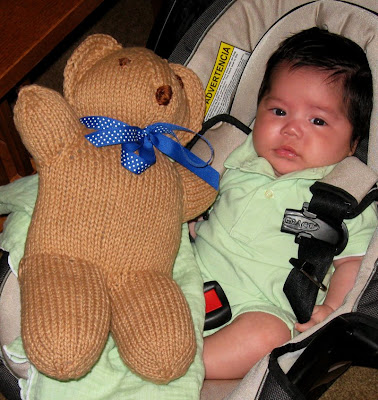 Here is the photo as promised of my finished Baby Bobbi Bear ... as you can see it is almost as big as William himself is ... although that will change very soon!

It was universally acclaimed as being a feat near to rocket science and also as an adorable bear.

I have four friends who all are having babies in the near future and foresee that I will be knitting bears in my spare time for the next month or two. I will say that it went quickly, being knitted in my spare time within the last two weeks. Although I did have a little problem coming up to the deadline and wound up spending a fair part of Sunday devoted to finishing up this little guy ... I do hate knitting to a deadline!

Email ThisBlogThis!Share to TwitterShare to FacebookShare to Pinterest
Labels: Knitting