I've put together a list of fifty movies that are worth seeing, and none of them are brand-spanking new. These are movies that perhaps you've never heard of, or if you have you may have looked them over. This isn't a list of the best movies ever made, although there are a few that below on such a list. They are not in any specific order.

Scott has a darned good list and I encourage you to check it out. I can endorse it based on his inclusion of movies I've seen which are ones I often recommend to people, only to receive a blank stare of nonrecognition:
However, he didn't include everything that I would have, naturally. Here is my addendum, if you will, to his list. In no particular order, just as they occurred to me. 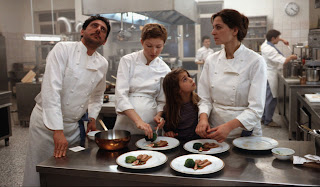 Martha is a chef who has a great deal of discipline, an obsession with food although she never seems to eat, and little joy in her life. When her sister dies, Martha is forced into facing unknown situations after her orphaned niece comes to live with her. Then a new chef is added to the staff and Martha's loss of control seems complete. Suddenly Martha's life is no longer under control at all with the expected growth of character resulting.

This is a slow and deliberate movie but the acting and dialogue are great and a lot of the scenes are very funny. Naturally, as this is about a chef, it is a major "foodie" film. Mostly Martha is a German movie with subtitles but don't let that scare you. Actually we liked listening to the German and picking out words that were almost the same as in English ... but that's the kind of thing our family does for fun.

Do not be fooled by the American remake: No Reservations. It completely messes up the last third of the movie. 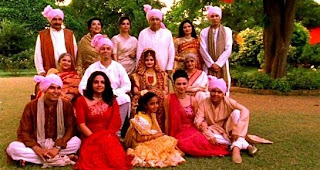 A large, Westernized, upper middle class Indian family is gathering for a wedding in a movie that includes Bollywood-ish singing, dancing, and romance. What may be unexpected are the strong messages about family love, protection of the innocent from sexual predators, doing the right thing and telling the truth no matter what it costs you. I love this movie but Tom is the one who added it to this list which tells you that it has a wider range than one might expect. The "R" rating is for the language, mostly that of the Wedding Event Coordinator and his help. (A full review is here.)

3. The Castle
(Australia)
An understated comedy about a man whose home truly is his castle. Any normal person would jump at the chance to sell his property when the local airport wants to buy, as it sits at the end of an airport runway and directly under gigantic power lines. However, this man fights in court for the right to keep his home.

The father's unconditional love and approval for every person in his family is reciprocated by each of them. Watching the local news the father turns to his daughter, the only family member with a "college degree" (from hairdresser school), and tells her that they have "ripping bodies" but their hair really could use fixing up to be like hers. Needless to say, the daughter's hair is horrendous but her pleased and loving reaction underscores the family's complete happiness. If they think about the outside world at all it is to be sorry that the world doesn't have a share in their contentment and "riches". If more families were like this one then the world would be a better place. This movie is rated "R" for language. 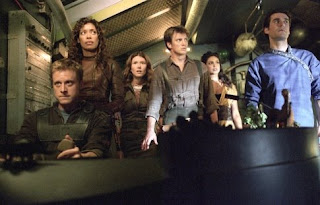 Is it a western? Yes. Is it sci-fi? Yes. 500 years in the future, society is a mixture of "core" planets with all the luxuries and those on "the rim" where life is more like living in a old time Western. The Alliance, the totalitarian government, controls everything in the core and would like to exert the same control over all the planets.

Simon and River Tam are on the run from The Alliance. They take refuge on a spaceship whose crew will do anything, legal or illegal, to keep fed and in the air. As a survivor from the losing side in the recent civil war, the ship's captain, Mal Reynolds, doesn't mind going against the authorities but has to rethink his decision when the Alliance sends an assassin to track River down. What follows is a fantastic, fast moving adventure crackling with wit. It is also one that examines what different men choose to put their faith in, how strong that belief is, and what it means to live an unexamined life. (My complete review is here.) 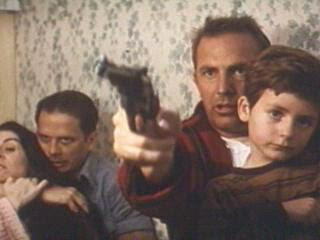 In Texas in the fall of 1963, Kevin Costner is one of a pair of recently escaped convicts who take an 8-year-old boy hostage on their journey, which soon becomes a journey with just Costner and the boy. The little boy has never known his father and his childish innocence sparks fatherly feelings in Costner.

Meanwhile, Clint Eastwood is the Texas Ranger tracking them down. Eastwood knows about Costner's troubled past and although he must capture him, Eastwood has a certain level of sympathy for him personally as well. Gradually we see that there is a constant contrast between the flight and the manhunt, the fatherless and those who could fill the fatherly roles. This is an understated movie but it is hard to match its examination of good versus evil, the consequences of the past on the present, and the strength of its statement against senseless violence. Also probably Kevin Costner's best performance.