Pope Benedict and Cardinal Sarah - together in one book. I can't wait. 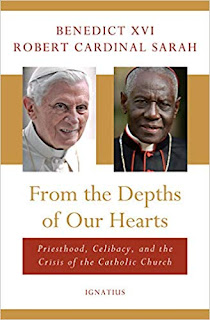 Here's the article that called my excited attention to this upcoming book. It is well worth reading because the media's in a tizzy. It seems the Pope Emeritus (Benedict) and the Prefect of the Congregation for Divine Worship and the Discipline of the Sacraments (Cardinal Robert Sarah) have written a book about priestly celibacy where they agree with Pope Francis.

I don't know why this is a big deal. Pope Francis has never said anything to indicate he'd change the Latin rite of priestly celibacy. Plenty of people have taken his offhand remarks out of context or amplified them to act as if he did. But no.

Anyway, here's the gist of what it's about.


In short, From the Depths of our Hearts addresses the question of priestly celibacy, explaining why it is a gift to be guarded and cherished. It is not, however, about the Latin discipline of celibacy, sic et simpliciter, nor is it written against the Pope’s own view of the matter. Quite the opposite, actually.

The authors offer their reflections to the whole Church, and, “in a spirit of filial obedience, to Pope Francis.” They do not say whether Francis asked for their opinion specifically, though Francis has encouraged a spirit of frankness — parrhesia — among churchmen and indeed throughout the whole Church, involving men and women of every age and sex and state of life.

Cardinal Sarah does urge Pope Francis not to relax the Western discipline any further, even in exceptional cases. When it comes to the major stable exception in the Latin Church — the Anglican ordinariate — it was Benedict who created it.