Making a Private Journey in Public: Reviewing "The Way" 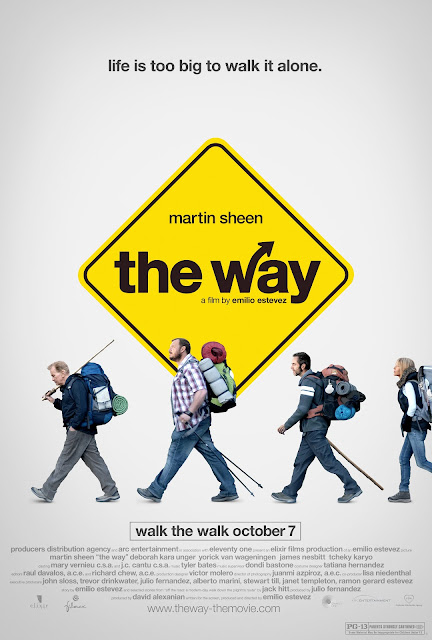 I have been intrigued by pilgrims walking the thousand-year-old El Camino de Santiago (Way of St. James) ever since reading author Robert Ward's experiences walking it in Virgin Trails: A Secular Pilgrimage. 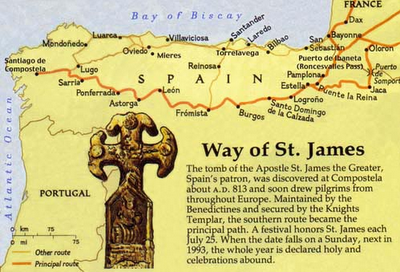 I came away with a healthy respect for the physical accomplishment of walking almost 500 miles (800 kilometers) over mountains and across plains from the French Pyrenees to Santiago de Compostela in northern Spain. Also, there was the attraction of that rarity — the idea of investing full attention on God for a month or so — which seemed like a romantic deed still available in modern times.

I probably will never get the chance to take that pilgrimage. It has just been one of those things that made me perk up my ears when El Camino comes up. Surprisingly, it comes up much more than you'd think, if you read the right blogs.

When I received the invitation to prescreen Emilio Estevez's new film, The Way, about a bereft father walking the Way of St. James, my ongoing interest in El Camino was a large factor in my attendance. If I can't get there any other way, the wonder of film can take me. Also, with Estevez and his father, Martin Sheen, involved it seemed to me as if there were less chance of this being a sappy, trite story ... which is what I fear any time I am tapped to prescreen a movie. (They see "Happy Catholic" and "Christian movie" is what they think ... which often leaves the story behind at expense of pounding the pulpit ... but I digress ...).

I was pleased to find a solid little indie film with gorgeous cinematography and a simple but engaging story.

Martin Sheen plays Tom, who travels to a town in the French Pyrenees to identify the remains of his estranged son who was killed while walking El Camino de Santiago. Ruing his lack of connection, overcome by his grief, Tom decides to walk the Camino for his son, leaving handfuls of ashes at shrines along the way.

As he goes, Tom acquires three unwanted companions, each of whom have their own hidden reasons. Estivez, who wrote the script, readily admits to being inspired by The Wizard of Oz but in truth one could compare The Way to any story that is based around a journey with a misfit group of comrades. This storytelling device is well known and for good reason. In watching the people rub against each other's pet peeves and tread unwittingly on their hidden secrets, we learn about them on a deeper level. We know the device because it is also the story of our own lives as we do the same to those around us. It is how we are made:  to journey through life both alone and in company.

The story was told in an understated way for the most part. Characters didn't preach sermons at one another and several revelations were very touching in what they showed of regret in choosing the wrong way. The acting was good also and although I am used to seeing Martin Sheen's familiar style, I was moved to tears when his character shrank at entering the morgue, saw his son's face, and later spread the ashes at the first shrine. For those whom this sort of thing concerns: none of the pilgrims identify themselves as practicing Christians so occasional swearing, drug use, and the like are able to be looked on simply as secular behavior. There were a few moments that struck me as false such as the first encounter with Jack the writer where his Irish eloquence about "the road" was so over the top that I winced. However, there were not many of those moments compared to the others that I enjoyed.

As I said before, this is a solid little indie movie and I recommend it. In fact, since I watched it from the third row of the theater, I plan on renting the DVD when it comes out and watching again when my eyes aren't crossed on the close ups. It is simply gorgeous, if nothing else, and I found the simple story inspirational.

MILD SPOILER & PONDERING ABOUT STORY
Despite recommending the movie, I was pondering what made The Way a "little indie movie" versus something like The King's Speech which also has a simple and inspirational story but seems more complete. The Way seemed to lack a layer or two of complexity that would have made a more well-rounded story.

My husband, Tom, (my date for the movie) became intrigued by El Camino and began looking up what he could find about it. He surprised me by saying that the filmmakers didn't tell the entire story in telling that when you show your filled Camino passport at the end of the pilgrimage you receive a certificate. Making the pilgrimage for religious reasons has historically earned a plenary indulgence* and that is still true today. Also those who state they made the pilgrimage for religious reasons receive the Latin version of the certificate.

Tom said that he thought the filmmakers missed an opportunity by omitting these details. How much more powerful, he asked, would it have been if when Sheen's character had the official change the name on his Camino certificate to his son's name if the indulgence had been explained then? It would have gone far in speaking about Sheen's attitude shift and his reconciliation with his son as a result of the journey. And it would have spoken to hope for life after death.

During the question-and-answer period following the film, Estevez said that he was "open" about faith. He hadn't made up his mind but bore no ill will to any specific faith. That openness, translated into this movie, seemed to take away a bit from the focus it could have had if he had been willing to take a firmer stand and push all the way to defining the conclusion more. The film is not afraid to show religious symbolism as, indeed, it could not be considering the subject. If only they had been a bit more willing to put the necessary firmness into the message.

As it was, we were left questioning the point and emotional impact of Tom's throwing the rest of the ashes into the ocean. It seemed an unnecessary coda, although I very much liked the final scene that followed it.


*The Handbook of Indulgences states that a plenary indulgence is granted to the faithful who perform the works listed below. This means the full remission of all temporal punishment (time spent in purgatory) due to sin in one's entire lifetime up to that point. Plenary indulgences can also be requested of Our Lord for the deceased. (source)
By Julie D. at September 08, 2011