Helping Us Through the Catechism 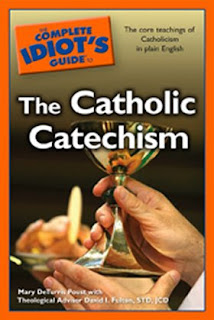 Catholic and catholic (with a lowercase "c") mean two different things. The first refers to someone who is a particular type of Christian who adheres to three basic things: (1) the tenets of a faith started by Jesus and continued by the apostles and their successors in the college of bishops, (2) forms of worship that date from the apostolic age, and (3) a particular system of governance. The second definition, the one used in the Nicene Creed, refers to "universality." The Church is "catholic" in that it is on a mission from Christ to bring salvation to all of humanity. The Eastern Orthodox Church, in its nearly identical creed, also uses the term "catholic," even though members are not in communion with the Catholic Church, and Protestants who pray the creeds also understand "catholic" with a small "c."

I have to admit that I'm a real sucker for "the basics" books. I like the little call-out boxes (where the above info came from) with extra information. I like the outlines. I like the lists of things to remember. What can I say? I'm obviously the target these books were designed for. Especially when they come with an nihil obstat and imprimatur (meaning that an expert has looked it over and found nothing against Catholic teachings in the book) ... like this book does. Quite often, between reading a "basics" book and reading the real thing (in this case, the Catechism), I will get a more complete understanding than I would have with simply one reference alone.

I really enjoyed reading this book and also enjoyed the author's true enthusiasm for her subject. Mary DeTurris Poust writes with clarity about the catechism and demystifies it for anyone who might be intimidated by cracking open "the Catholic rule book" as some might think it. Reading through her book reminded me that the Catechism is so much more than merely a rule book, however. It has not only guidelines to what Church teachings are but also guidelines to prayer life for example. I was reminded that I once heard Cardinal Arinze say in a podcast that he read some of the Catechism each day as a prompt to contemplative prayer.

The only problem I found with the book was when I turned to it for clarification on a question brought to me by someone. Just why was it that Protestants couldn't partake of the Eucharist with Catholics? I knew the basics but was curious to see how this book worded it.

Turns out the book didn't mention that at all that I could find. And I scoured it. Completely. Several times. (If someone does see where I missed it, be sure to let me know).

Now, I found this quite surprising. This is always a sore subject when my Protestant friends bring it up. And when not-so-friendly Protestants bring it up. Or how about when choose-your-own-menu Catholics pop it at me? In an election year, after the Pope visited our country, we have seen these questions come up time and again as to who can have Communion and why or why not.

So I went to the source to see where it was listed. Sure enough, it is very clearly spelled out, down to the last detail. I was especially pleased to read 1401 which allows for charity in emergencies in this matter.

1398 The Eucharist and the unity of Christians. Before the greatness of this mystery St. Augustine exclaims, "O sacrament of devotion! O sign of unity! O bond of charity!" The more painful the experience of the divisions in the Church which break the common participation in the table of the Lord, the more urgent are our prayers to the Lord that the time of complete unity among all who believe in him may return.

1399 The Eastern churches that are not in full communion with the Catholic Church celebrate the Eucharist with great love. "These Churches, although separated from us, yet possess true sacraments, above all - by apostolic succession - the priesthood and the Eucharist, whereby they are still joined to us in closest intimacy." A certain communion in sacris, and so in the Eucharist, "given suitable circumstances and the approval of Church authority, is not merely possible but is encouraged."

1400 Ecclesial communities derived from the Reformation and separated from the Catholic Church, "have not preserved the proper reality of the Eucharistic mystery in its fullness, especially because of the absence of the sacrament of Holy Orders." It is for this reason that, for the Catholic Church, Eucharistic intercommunion with these communities is not possible. However these ecclesial communities, "when they commemorate the Lord's death and resurrection in the Holy Supper . . . profess that it signifies life in communion with Christ and await his coming in glory."

1401 When, in the Ordinary's judgment, a grave necessity arises, Catholic ministers may give the sacraments of Eucharist, Penance, and Anointing of the Sick to other Christians not in full communion with the Catholic Church, who ask for them of their own will, provided they give evidence of holding the Catholic faith regarding these sacraments and possess the required dispositions.
Source: Catechism of the Catholic Church

The book covers the Catechism section before this and the section after this but completely ignored this part. Which is puzzling and also rather troubling. I did not see any other omissions of this sort, however, one must remember that I wouldn't have found this had I not had a specific question. One hopes that this is an inadvertent omission or unfortunate cut mad by an editor one of those things that is corrected in the next edition.

This also illustrates the reason to always go check the source, even when dealing with a very good "basics" book. One gets much needed access to original information without the interpretation that another book adds. I often tend to gloss over this step and this is a good reminder to me that skipping the original is just cheating myself.

All that said, there is much to like in this book. It gives a good overview of main points and continually points back to the Catechism as the authority. I think that it will do much to help people understand that the Catechism isn't as daunting as they may believe.

I recommend it as an overview but with caution to be used to check the Catechism for complete teachings. Which is the point of the book in the first place, so that's not necessarily a bad thing.
By Julie D. at May 20, 2008